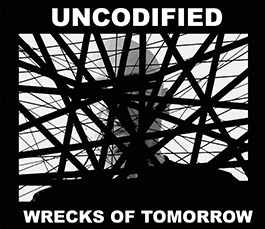 OLD EUROPA CAFE (イタリア)リリースCD
In search of both identity and remembrance, within a scenario of urban and social decay which is becoming more and more oppressive.
How long do we have to make up our mind?
OEC presents Uncodified's latest brainchild, which is among his most devastating works ever.
Nine tracks of extreme electronic arrangements to shape an increasingly contaminated and ucompromising style.
The perfect soundtrack for all those phobias, insecurities and anguish nurtured by a contemporary society close to its almost inevitable decline.
Power-electronics cues, death industrial, radical noise, filtered vocals, distorted metal beats and varied brutalism.
Once more mastered by Simon Balestrazzi (TAC) enriched by Marco Wertham's artwork (WERTHAM / CALIGULA031)

Album released in an elegant digipack - limited edition of 200 copies.